Artisan Handcrafted Quality
Our fine art limited edition prints are made-to-order by our own expert in house staff, inspecting each piece to make sure it has been made to perfection. We use only premium materials. We love art and care about it!

Made in USA
Mahlstedt gallery is proud to be 100% made in the USA!! All Mahlstedt Gallery prints are made and assembled in the USA at our gallery in New York.
This Art Painting Original Is…
THE MAHLSTEDT GALLERY EXPERIENCE

BROWSE
Browse our extensive and professionally curated collection; find the perfect match for your artistic goals.

RECEIVE
Shipped from our New York gallery or directly from the artist’s studio, safe and timely delivery to your doorstep is guaranteed.

Maurice Sapiro
Highly regarded Realist painter Maurice Sapiro is no stranger to taking chances. As anyone who studies his work can attest, his ability to perceive, capture, and transpose light and color onto canvas is unlike any other. Sapiro has dedicated his life to art and as a result he has received many awards for his work.

He has authored many art books which have sold over 48,000 copies and have been considered authoritative classics in the classroom and the studio for over 30 years. 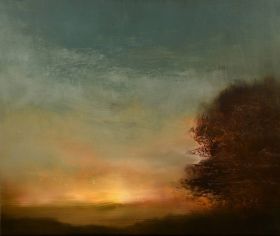 Sunset Oak
Maurice Sapiro
ORIGINAL
$3450
Sunset Oak by Maurice Sapiro is a rich painting of a sky at sunset depicted in an array of tones, including deep blue, vibrant yellow, orange, and faded green. It pulls together to form a heavenly landscape with picturesque sunset.
SHIPPING
Continental US Shipping
Shipping to addresses in the continental US is FREE. All products are shipped by common carrier from New York.
Click here for details
International Shipping
International and non-continental US shipping is available.
Click here for details
Shipping methods vary for originals and prints.